The list goes on, and you may rightly assume that I will talk about the remainder of the list some other time, but for now – I will divulge you of the above three points.

Without a doubt, 2016 was a difficult year. It started out with me battling the freezing temperatures New York City had to offer with a wonderful photoshoot that I had with a favorite photographer of mine whose work you must check out (John Martin Productions). It was through this photoshoot that I discovered the city which I vowed never to return to when I was barely 11 years old, would be the city I feel most at home with.

Washington state was a beautiful place to reside in, but it never felt like home. Though I do miss the evergreen-ness and the many undiscovered nature parks – it was the various experiences I had to forego that brought me to leave. I return to the place every now and then, but as a visitor and each time I come to “visit” the memories of why I left come to haunt me.

It was the place that brought me to being mentally depressed and the battle to get away from such hideous thoughts is no easy task. 2016 had made me challenge various mountains to get to the mindset which I am today and even so, it’s difficult. It’s like those potholes that are at times undiscoverable at night, and once driven upon; you’ve already sunk through and the battle becomes to get oneself out of the ditch.

As a first-generation born South Indian girl, a now, “ABPD” and advocate for change in our community – it starts with the self and as cliché that may be, to change a person’s mindset and what they may believe in  is not an overnight task. Whatever ideas you or I may have had about the fabric of the nation, whatever values that you might have held sacred and whatever lines you promised not to cross – 2016 challenged it all.

I may return to calling it a home someday, but for now; Seattle was never home.

And I’m sure as many of you realize – I have this passion for the arts. I am first and foremost a dancer and that is where my platform began. Though, my performances have dropped dramatically due to the “hustle of life” – I still dance at whichever open platform I am granted. This means from the space in my living room to empty studios and even my car. (Though I recommend either having your windows tinted or doing this at night).

It is through my talent of dancing that landed me the title of Miss India Washington and Miss India USA’s Miss Popular back in 2014. I was then able to dip my toes in the media industry and felt not just excitement but overwhelmed and still do.

I recall in the second grade where I was the lead in the Christmas play for school. I was appreciated for whatever skills I showcased as “Mrs.Claus” and since that moment, I had this desire to act.

I must firstly thank my Mazhavil FM & Annorunaal family for giving me the role of Sophie. It was my official taste of what “acting” means, and I became addicted. I wanted more…but having a taste at what the “mini silver screen” wasn’t just all that I gained. I gained true family and friends. They came in at a point in my life where I was at my lowest and managed to channel that energy into the arts. They are the people whom I can turn to for advice, care, laughter and memories…

These people know who they are, and note – a simple thank you isn’t enough for what you all have done for me, but those are the only two words I have. I am extremely grateful for all of you. 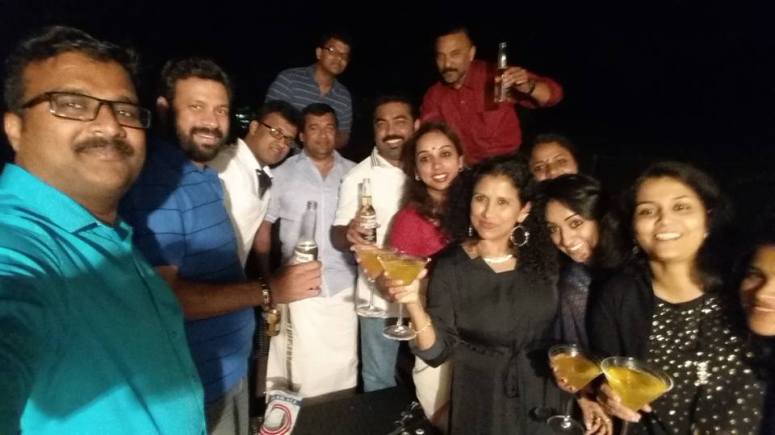 Now, for the gritty truth. The pursuit of becoming an actor is no easy one. You should know someone to your foot in the door, or pay your way in. Talent hardly matters at this day and age. The pursuit of trying to be an actress in the Malayalam industry has drained me physically, emotionally, and financially…it’s a battle within itself, and to make it out, well, I guess you would be considered a survivor…if that.

By trying to pursue this industry (Malayalam Film Industry at least), I’ve dealt with people from various walks of life, too many walks of life. There are the few who are respectful and genuine but there are the plenty who have another intention especially when it comes to those aspiring female artists like myself.

One thing I need to clarify: Acting is not the same thing as being an Actor. “Acting” is the actual performance by an individual being on stage or screen. “Being an Actor” means not just performing, but marketing yourself to create acting opportunities. Of course, being an actor also includes acting, but honestly (and through my own experiences), if you plan on pursuing a career as an actor, the percentage of your time spent performing is relatively low.

My aspirations to act is a dream that is killed off every time I get close to perhaps making something of it. I am forever blessed to having taken part in the projects that I have done (Annorunaal, Luvvh, Reset The Day, various commercials & advertisements), and extremely grateful to my Mazhavil FM family for the constant support, but as this year comes to a close… and with much difficulty and sadness I have come to accept that perhaps this isn’t the field for me.

BUT, even by saying this – I still have a little glimmer of passionate hope that will reside in me until the dream is met, so that being said. I will continue to pursue acting as it comes to me. Whether I choose to tell the world about it is my business, so please kindly stop nagging me about when my next project it or why nothing is working out. I will disclose what happens in pursuit of the dream of acting to when the time is right. There is a time for everything after all and patience is a virtue.

And thus, we come to my final point – being alone. This is partially why I despise the holiday season as the feeling that myself as being isolated from the joy and holiday cheer that is being spread. Don’t get me wrong, this is a season that I cherish because it does bring people together, but I envy that I don’t get to be a part of the wondrous celebrations because I have no one to go to…

BUT, I was just reminded of the many people in this world who go through far worse circumstances than being “alone.” The holidays have become driven by commercialism and the lusting after material things. The original meanings are buried deep down below the pile of presents and show of the best tree, party, or décor.

It’s about togetherness and giving back, and that’s exactly what I did this year. I’ve done what I can to give back to charitable organizations for a cause in developing countries, donated clothes, books, and material things that would be much more beneficial to another than myself who may go purchase it whenever moment.

Being alone brought me to realize these things. Sure, I would love to spend it with friends and family who wish to make it as celebratory as possible, but it’s ok if I can’t – because I know there’s plenty more in life to celebrate about (like me being alone and independent, having a career, great friends), and plenty more that I am able to do.

2016 was a tumultuous year, but we all survived it. Spend the rest of what remains of this year to reflect upon yourself – then be as selfish as much to reflect upon the rest of the world and what you may possibly do for it. Let’s work to make 2017 a year to be … better 🙂